Pony my love in print and play
Homepage / The catalog /

Pony my love in print and play 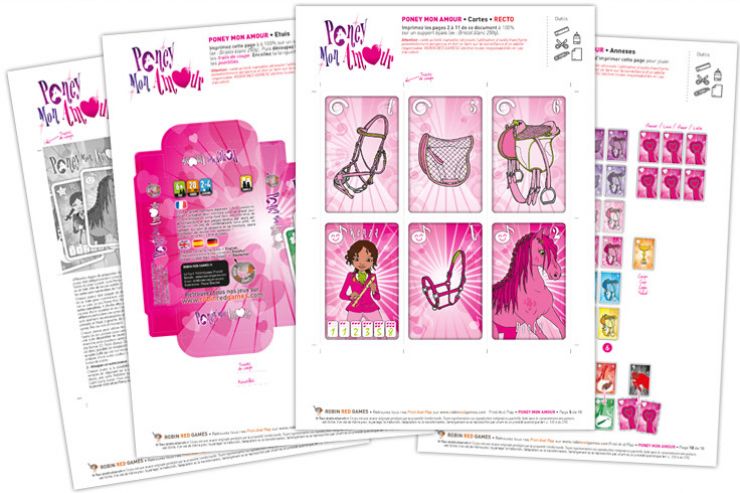 Pony My Love in PRINT AND PLAY
Leave a comment about the product
Ref. PMA001PNP  •  EAN 3 770003 625070
PRINT AND PLAY - To win the big annual equestrian competition, prepare your pony for the competition before the other competitors. To do this, collect the different equipments in the required order and triumph over all the trials with your mount.
Available languages :
French, English, German, Spanish

It's the day of the great equestrian competition! Our riders must prepare their horses and stay focused despite the unexpected events of the competition and the traps set by their opponents. A game of combinations where love, which unites the rider and his horse, will triumph over all the trials! 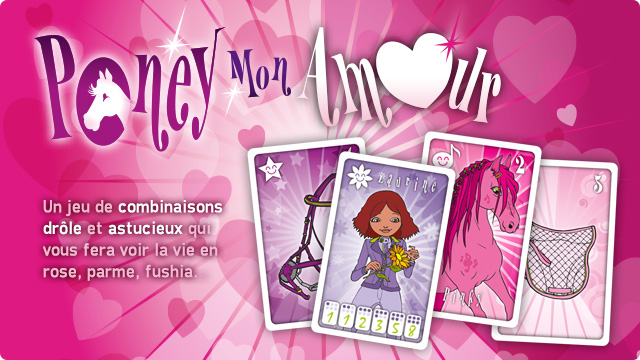 To win, you have to prepare your pony for the competition before the other competitors. To do this, each player must collect, in order, the following cards:

1 - Halter (to get his pony in the meadow and bring him back to the stable).
2 - Pony (to be able to participate in the competition, you must of course own a pony).
3 - Grooming (to heal his pony and make him the most beautiful).
4 - Net (to effectively guide his mount during the tests).
5 - Carpet (to accommodate the saddle respecting the comfort of the pony).
6 - Saddle (the last item, you're ready for the race).

The first player who achieves these 6 steps wins the round.

Each player chooses 1 Cavalry card at random (or by mutual agreement with the other players). This card is placed, face up in front of the player, and determines the player's favorite color. The player who won the last round of Poney Mon Amour is designated First Rider for this round (failing that, the youngest player starts). Then, the turn continues in a clockwise direction for subsequent rounds. The game has as many games as there are players around the table.

The First Rider shuffles the cards and distributes 5 cards to each player. The remaining cards are placed face down in the center of the table and form the pick. During the game, the players place the played cards, face up, next to the draw pile to form the discard pile. When the draw pile is empty, the First Rider shuffles the discard cards and returns them to form a pick. 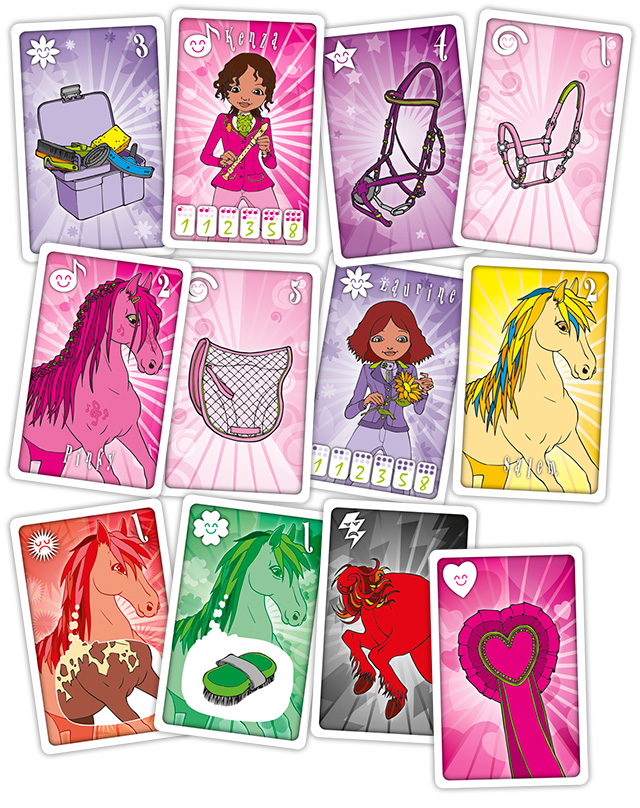 The suite consists of 6 cards representing the different stages of preparation of the pony. Each player must compose his suite according to the following order of pose: Halter, Pony, Grooming, Net, Carpet and Saddle. In order not to forget this order of laying, the cards are numbered from 1 to 6.

Each player must try to drop a card from his hand to start, continue, or finish his sequel. The game Pony My Love has 6 complete suites. 4 of them are associated with the color of a rider and the other 2 have no particular affiliation. The cards of the same color are easily recognizable thanks to the symbols at the top left of each card (star, spiral, flower or musical note).

Each player can use the cards of one or other of these colors to compose his suite. Having a mismatched suite does not cause any penalty. On the other hand, having several cards of his color gives bonuses (see Bonus Points). During this action, it is therefore possible to replace the last card of his suite (the one that is not covered) with a similar card of another color to increase his bonus points.

Each player has the opportunity to slow down his opponents by depositing on the continuation of one of them (choice), a problem card (red card) or Grosse Anger (black card)! For this, it is necessary that the target player has a Pony in his suite (card # 2). Attention, it is not possible to put a problem card on another card Problem. Problems are not cumulative.

An attacked player can cancel a problem card by placing on it the corresponding Solution card (green card) (for example, the Brush card cancels the Mud card). The Problems and Solutions cards are numbered from 1 to 6. Solution # 1 against problem # 1, solution # 2 against problem # 2, and so on.

A love card can cancel any problem. To cancel the Grosse Anger card, it is imperative to put on this card, 2 cards Love. At the rate of one card per turn, 2 turns of play will be necessary to resume the race. Once the problem is resolved, the cards are set aside and are excluded from play for the rest of the round.

Note: It is possible for a player to help an opponent in difficulty, by posing a Solution or Love card on his Problem. This action takes a turn as if the player had played for him.

If the player could not or did not want to do one of the previous actions, he must compulsorily put a card from his hand on the discard pile (face up).

The game ends as soon as one of the players completes his 6-card suite by placing a Saddle card. He scores 5 points and wins the round.

At the end of each round, each player (whether or not he won the round) counts his points bonus according to the number of cards, the color of his rider, which he has assembled, according to the diagram. next :

When all rounds are played, the winner will be the player with the highest number of points. He then receives the Cup card and becomes the First Rider of the next game.

To win the big annual equestrian competition, prepare your pony for the competition before the other competitors. To do this, collect the different equipments in the required order and triumph...
12.00€

PRINT AND PLAY - Sagacity and speed are the key words of this game, confusing in more ways than one! A game of speed and concentration where you will have...
1.90€

PRINT AND PLAY - Animated by the characters of the famous Fables of La Fontaine, Misti'zzle is a card game based on observation, graphics adapted for children.
2.50€

Aristo'zzle in PRINT AND PLAY

PRINT AND PLAY - A game of 7 families but also a puzzle in the world of 7 aristocrats stuck in their fancy dress suits, Victorian fashion.
1.90€

My first card game in PRINT AND PLAY

PRINT AND PLAY - Discover together the pleasure of playing cards with "My first card game", to play alone or with family to a multitude of different games (contains 5...
1.00€
Stay connected
Don't miss it !