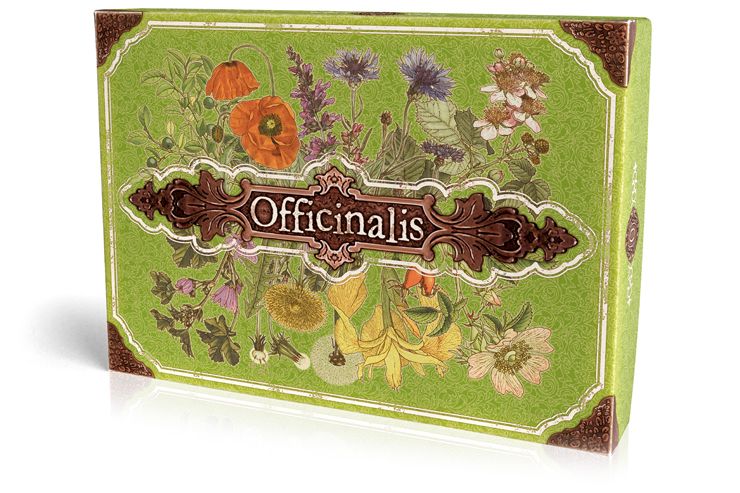 Officinalis - Limited Edition (KS)
Leave a comment about the product
Ref. OFF1019  •  EAN 3 770003 625599
Officinalis is a game of observation and combinations. You play as an herbalist whose goal is to harvest medicinal plants to concoct infusions that bring big while avoiding the poisonous plants of your opponents!
Available languages :
French, English, German, Spanish, Dutch

Need information? Check our frequently asked questions.
All about the Robin Red Games publishing house.
Any questions about this product ? Contact us by email.
Description
OFFICINALIS is a game in which players embody wise pickers who roam wild lands in search of medicinal plants. The game has 49 distinct plants with proven virtues and 4 special cards. Alone or as a team, players will have to compete for the best plants before their opponent (s).
The game has 8 large families of plants that correspond to the natural environments in which they grow (Commons, Moutains, Forests, Rivers, Gardens, Landes, Prairies and Aromatic). In nature, most of these plants breed in several environments, but for the purposes of the game, we chose to "categorize" them in the one where they most generally evolve.
Each place contains 8 plants: 6 widespread plants, 1 rare plant and 1 toxic plant. For simplicity, we call Toxic, a plant that is potentially dangerous. In reality, most of these plants can have beneficial virtues if properly used. As Paracelse (considered the father of toxicology) so aptly puts it: "Everything is poison, nothing is poison ... It's a question of dosage". The game also includes 4 plants invented for the game. They have special exotic abilities that pleasantly spice up the gameplay.
The last 8 cards are the pickers, they are not playable and are used to define the favorite place of each player.
To win the game, you have to accumulate as many points as possible by harvesting plants. The rarer the plant, the more points it yields. On the other hand, toxic plants make them lose.
But the secret to being victorious is to create Infusions by combining certain plants to score bonus points that will make all the difference. There are 12 possible combinations: Anti-Stress, Tonic, Circulation, Feminine, Detox, Hepatitis, Respiratory, Digestive, Silhouette, Wishes, Articulation and Peaceful Night.
A round ends when all the rare plants (the Merveilles) have been harvested. This rule point may seem trivial but it adds a very interesting notion of stress. Indeed, the round can end after two or three rounds, so it may be wise to take risks to score more points ... Or not. Another important detail is that the gaming experience is very different depending on the number of players.

The game is played in 7 rounds but nothing prevents you to shorten or extend the game if you want it.
This box includes:
• 82 tarot format cards
• 6 game aids
• 1 wooden donor
• 1 Bookmark
• 1 thank you card
• 1 badge
• 12 infusion bag
• 1 rulebook in 5 languages
• 1 lexicon of the game's plants
MADE IN FRANCE
This game also exists in normal version. For more details, click here.
Video
Downloads
Officinalis Limited Edition - Rules of the Game
25/09/2019 - 3127 ko
Download
Comments
There is no comment for the moment. Be the first one by clicking here.

Officinalis is a game of observation and combinations. You play as an herbalist whose goal is to harvest medicinal plants to concoct infusions that bring big while avoiding the poisonous...
12.00€

Trut is a card game called "counter" to make folds bluffing. This edition brings up to date this dynamic game fallen into oblivion.
12.00€

Trut is a card game called "counter" to make folds bluffing. This edition brings up to date this dynamic game fallen into oblivion. Attention: This is a limited edition copy!
25.00€
Stay connected
Don't miss it !