Magic Cooking
6 avis client
4.67 6
Leave a comment about the product
Ref. MC001  •  EAN 3 770003 625049
Play as one of these wizards and take on the challenge! Can you win the Magic Cooking? A card game accessible from an early age and will seduce the whole family. To win, you will need to be bold and insightful!
Available languages :
French, English, German, Spanish, Dutch

In a very distant time, a little to the left of the Middle Ages, prospered the kingdom of Abraxas. Queen Gourmandine IV ruled this kingdom of gastronomes with an iron hand in a velvet pouch. Every year, the greatest wizards of the known world competed ingenuously to create new recipes so delectable, that they were said to be magical. And it was at the Summer Solstice, a day particularly expected of the Abraxians, that took place the Magic Cooking tournament where the 6 most powerful wizards of the Kingdom were fighting.

Play as one of these wizards and take on the challenge! Can you win the Magic Cooking?

A card game accessible from an early age and will seduce the whole family. To win, you will need to be bold and insightful! Magic Cooking is a game that will gather around a table entranced players who will not stop after the first part. 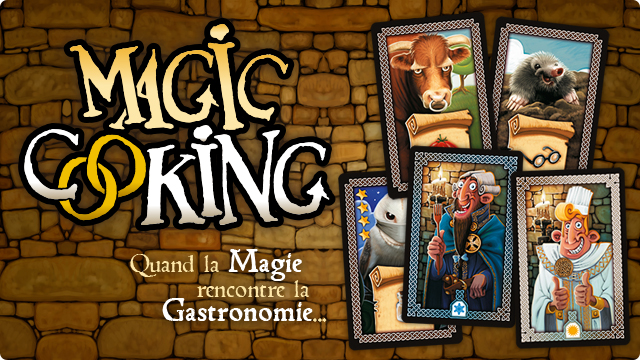 The ingredients are necessary to make magic recipes. There are 4 cards per ingredient, with the exception of Albino Crow Feather which only exists in one copy. If you collect this card, it allows you to start the next round.

Some ingredients have a value of 1 to 4, symbolized by a number of stars. The Spiderweb ingredient, even if it does not earn any points, can win any fold.

Each Mage has a specific spell of his own, which he can play once per game (see spells of the Magi).

Score as many points as possible by picking up creases.

The players, starting with the youngest player, choose a random Persomage card or distribute them by mutual agreement. The youngest player starts the game. He receives the honorific title: Ordome. For the following rounds, the Ordome Mage will be the one who has collected Albino Crow Feather.

Magic Cooking is played in as many games as players, adding the scores each time.

Players play one after the other, clockwise, starting with the Ordome.

Each turn, each player reveals an ingredient of his hand and shows it:

• If it corresponds to an ingredient present in Cauldron or if it is a spider's Web, the player picks up ALL the Cauldron cards on the table. He puts his fold aside, face down. He then sets a new ingredient in his hand, face up, to create a new Cauldron, then draws two ingredients to redo his 4-card hand. The player who wins the very first fold of each round (1 visible ingredient and 3 hidden faces) receives the honorary title: Estueux. The Mage Estueux has the advantage of being able to watch, at any time, the ingredients composing the Secret Cauldron.

• If the Cauldron consists of only one ingredient, and the next player applies a strictly identical ingredient, he pronounces the magic formula Abraxas and scores 10 points. He puts his fold aside, puts an ingredient in his hand to create the new Cauldron, and then draws two ingredients to replenish his hand.

Players continue the game as well until all the ingredients are set.

At the end of the round, if the draw is empty, the player does not draw but the game continues.

• If there is only one ingredient left in the hand that is used to take a fold, the player to his left creates the new Cauldron.

• If a player has no more ingredients, he passes his turn and so on until all players no longer have a single ingredient in hand (the same player can play several times in a row to finish put the cards in his hand).

When all players no longer have cards and there are still ingredients on the table, the last player who took a Cauldron picks them up to add to his folds. 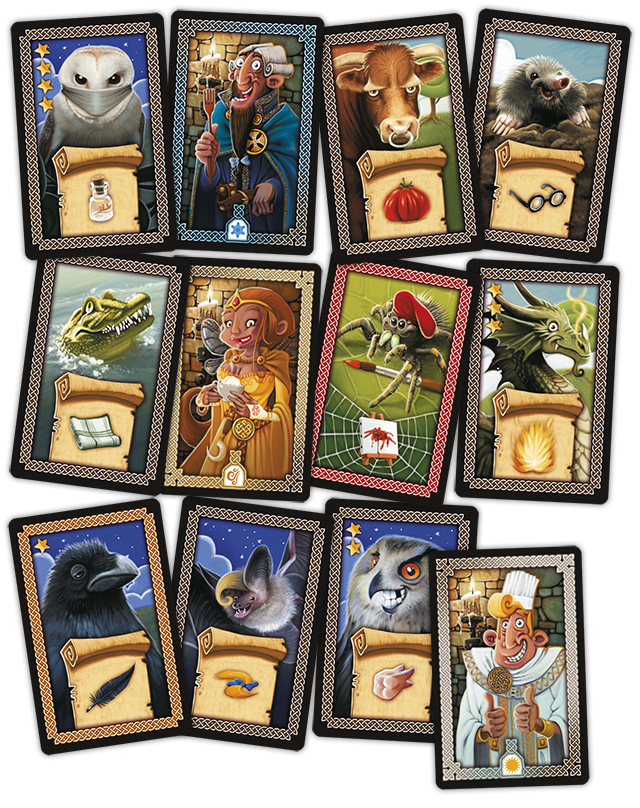 Points are counted at the end of each round. Each player adds the Stars in the corner of some ingredients (for example, each Raven Feather is worth 1 point). A starless card is worth 0 points.

The player with the highest number of ingredient cards wins a bonus of 3 points (in the event of a draw, no one scores). An Abraxas reports 10 points.

The player who scores the most points wins the round and receives the honorary title: Uscul. Glory to the Mage Uscul! A new round can then begin.

Spells of the Magi

Spells can only be used after picking up the first trick.

They are played once per game, at any time even when it is not a player's turn to play (for example, each spell will be played only once in a 4-player game , composed of 4 heats).

The player can play his spell simultaneously or to cancel immediately, without waiting for his turn, a spell played by an opponent.

The player returns the Persomage card when his power has been used. There is no obligation to use a spell during a game.

Emilien Le Devin Rouge : its Burn spell can ignite any ingredient and destroy it. This spell also acts on the spell of another Persomage. The card is set aside and will not be counted by any player..

Enrico Le Vert : his Falsification spell makes it possible to turn a card into any other card, to make a pair. This spell does not work to make an Abraxas.

Gordon Le Bleu : his spell In Full Light cancels the spell of another Persomage that has just been played. It is no longer possible to play spells during this round.ts restent dans le Chaudron et ne sont pas récoltés. Le round se poursuit normalement.

Moka La Fée Crème : his spell Bourrasque cancels a fold. The ingredients forming a fold fly away. The fold is declared non-existent. It is set aside and will not be counted by any player.

This box includes:
• 55 cards divided into 13 rare ingredients and 6 fearsome Magicians (Characters cards).
• 1 rulebook
This game also exists in giant version. To go on the sheet, click here.
MADE IN FRANCE
Downloads
Magic Cooking - Rule of the game
25/09/2019 - 2217 ko
Download
Comments
There is no comment for the moment. Be the first one by clicking here.
Stay connected
Don't miss it !