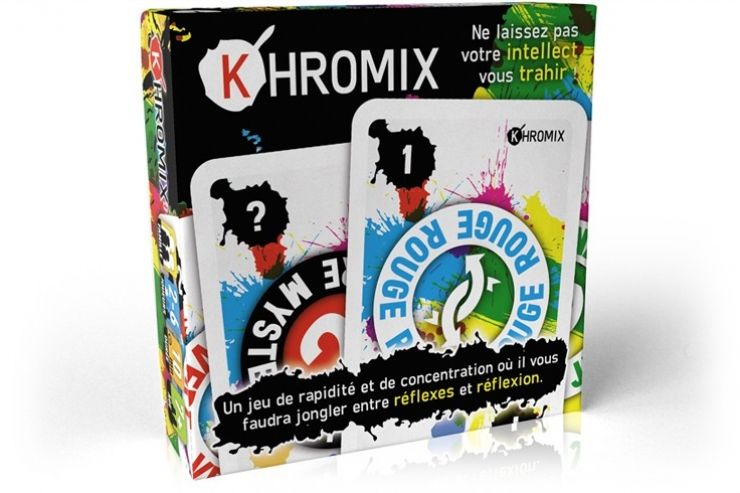 Khromix
2 avis client
5.00 2
Leave a comment about the product
Ref. KRM001  •  EAN 3 770003 625063
Sagacity and speed are the key words of this game, confusing in more ways than one! A game of speed and concentration where you will have to juggle reflexes and reflection.
Available languages :
French, English, German, Spanish, Dutch

Sagacity and speed are the key words of this game, confusing in more ways than one! A game of speed and concentration where you will have to juggle reflexes and reflection.

KHROMIX uses the natural contradiction of the Stroop effect (named after the psychologist John Ridley Stroop). This effect is created by writing the name of a color in a different color. Example, write the word YELLOW in RED. Our brain can not help treating the whole word, so we are sometimes encouraged to read the word instead of telling its color. KHROMIX associates this phenomenon with a clever game mechanics (and a bit twisted, we must admit) which consists in "switching" regularly between the word and the color. Add to that a factor of speed and you get a delusional game that guarantees you a laughing crises memorable. 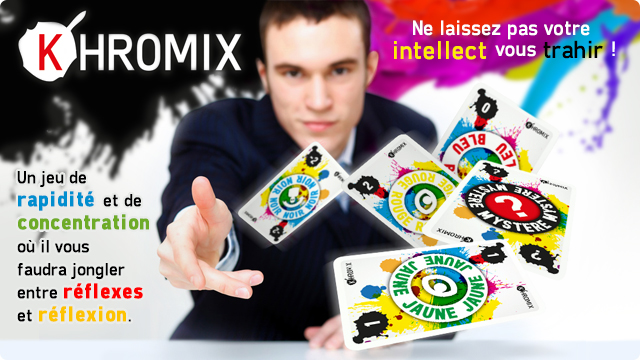 To win, each player must try to collect as many cards as possible. Cards have Bonus Points, Malus Points or Multipliers displayed in the upper left corner. The winner is simply the one who ends the game with the most points.

All cards are evenly distributed among the players after being well mixed. Excess cards are set aside and will not be used for this game. Before starting another one, they will have to be reintegrated into the game. The youngest player starts, then for the following parts, it will be the winner of the previous part which will start. Players do not look at the cards that have been dealt to them. They are arranged before them, face down, and form the Active Pile. The Stack Of Gains will be placed next to the Active Stack. 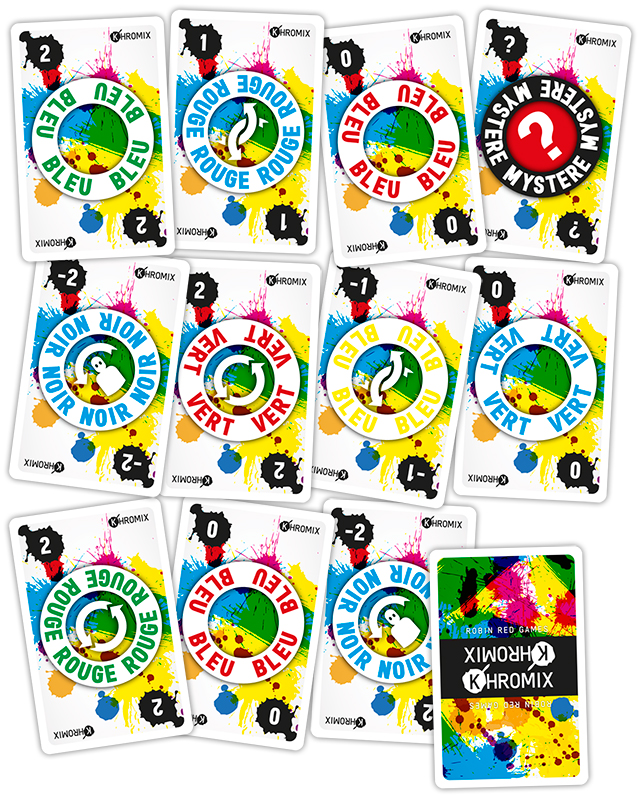 In turn, in a clockwise direction, each player will discover the card above his Active Stack and place it, face up, in the center of the table. It is possible that this card (the Current Card) covers one or more other issues from previous rounds. Simultaneously with this action, the player asks aloud, so that each of his opponents hears it clearly, the word COLOR or the word NAME.

If he requests the COLOR, the player wants his opponents to announce loudly (so that each player hears it distinctly), the color of the word written on the Current Card. Be careful, it is important to indicate which color is written the word. Stay alert as the words on the cards are color names. For example, if the word RED is written in blue, the opposing players must announce BLUE.

The NAME is requested.

If he requests the NAME, the player wants his opponents to announce aloud (so that each player hears it distinctly) the name of the word on the Current Card. Attention, it is good to say the word written on the map. For example, if the word RED is written in blue, the opposing players must announce RED.

To win the Current Card, each player, except the announcer, must answer the question before his opponents. The fastest wins. But be careful not to confuse speed and precipitation. Your brain will try to get you to read the word before thinking about color (or vice versa). Keeping control can be difficult.

If the first answer given is TRUE.

The player who gave the correct answer picks up the current card and places it face up in front of him in his stack of winnings. In the case where the current card covers others, he picks up all the cards in the center of the table, and deposits them, face up, into his stack of winnings, taking care not to change the order. If the Current Card has a Special Ability (central pictogram), the player may choose to use it or not (see Special Abilities). If he does not use it immediately, the effect is lost. Special Abilities of any cards below the Current Card are not used.

If the first answer is FALSE.

• See: The player who wins a current card with this ability can choose to watch the next card of one of his opponents.

• Swap: The player who wins a current card with this ability may choose to swap that card with one of his opponents' cards, but only the cards above their active stack.

• Pass: The player who wins a Current Card with this ability may choose to designate one of his opponents to play his next turn.

• Inverse: the player who wins a current card with this ability can choose, without obligation, to reverse the game's meaning. If the game is played from left to right, it will now be played from right to left. 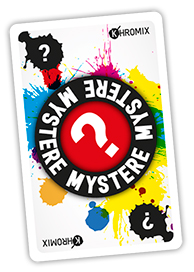 The Mystery Card has the function of disrupting the rhythm of the game. Indeed, the player who plays the Mystery Card can ask any question, for the sole purpose of surprising his opponents and making them lose their concentration. The more the question is wacky and the better. Of course, any answer will do the trick, even if it is false (Example: "What is the age of the captain?", Answer: "72", it is won!). The fastest player to react wins the Mystery Card. The Mystery Card pays no points. If it covers other cards, they are won as if it were a normal current card.

The game ends when one of the players no longer has a card in their Active Stack. The remaining cards of the other players are lost. Players calculate the points in their Stack Of Gains, taking care to add them in the correct order. The first card is added to the second, then their total is added to the third, and so on.

The game box contains 56 COLOR cards and 4 MYSTERE cards as well as a detailed rules booklet.

PRINT AND PLAY - Sagacity and speed are the key words of this game, confusing in more ways than one! A game of speed and concentration where you will have...
1.90€
Stay connected
Don't miss it !