Hanafuda sakura in print and play
Homepage / The catalog /

Hanafuda sakura in print and play 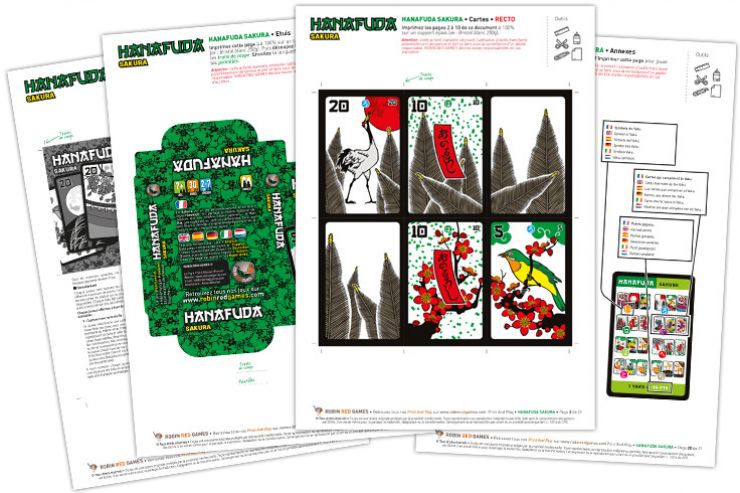 Hanafuda Sakura in PRINT AND PLAY
Leave a comment about the product
Ref. HF0003PNP  •  EAN 3 770003 625155
PRINT AND PLAY - For this edition, and to follow Koï Koï, we chose the very popular version of Hawaii: the Sakura. Simpler than Koï Koï, Sakura has the advantage of having the same capture system with, in addition, the ability to play up to 7 players.
Available languages :
French, English, German, Spanish, Dutch, Italian

Hanafuda is a very old traditional and popular Japanese card game, which has had many modern incarnations. The name Hanafuda does not refer to a single specific game, translated literally, it means "flower game". Many games have been created based on the iconography of the original Hanafuda, and although each game has its distinct name, they are often collectively referred to as the Hanafuda generic label. For this edition, and to follow Koï Koï, we chose the very popular version of Hawaii: the Sakura. Simpler than Koï Koï, Sakura has the advantage of having the same capture system with, in addition, the ability to play up to 7 players.

This box includes:
• 48 cards divided into 12 families each illustrating a month of the year associated with a flower (each family is composed of 4 cards)
• 2 jokers
• 5 cards help game
• 1 booklet of detailed rules MADE IN FRANCE
Downloads
Hanafuda Sakura - Rules of the game
25/09/2019 - 2937 ko
Download
Comments
There is no comment for the moment. Be the first one by clicking here.

PRINT AND PLAY - Sagacity and speed are the key words of this game, confusing in more ways than one! A game of speed and concentration where you will have...
1.90€

Officinalis in PRINT AND PLAY

PRINT AND PLAY - Officinalis is a game of observation and combinations. You play as an herbalist whose goal is to harvest medicinal plants to concoct infusions that bring big...
2.90€

Game of 7 Christmas families in PRINT AND PLAY

PRINT AND PLAY - Re-discover the traditional game of 7 families Special Christmas, beautifully illustrated, to spend a friendly and fun family.
1.90€

Trut in PRINT AND PLAY

PRINT AND PLAY - Trut is a card game called "counter" to make folds bluffing. This edition brings up to date this dynamic game fallen into oblivion.
2.50€

Pony My Love in PRINT AND PLAY

PRINT AND PLAY - To win the big annual equestrian competition, prepare your pony for the competition before the other competitors. To do this, collect the different equipments in the...
1.90€
Stay connected
Don't miss it !