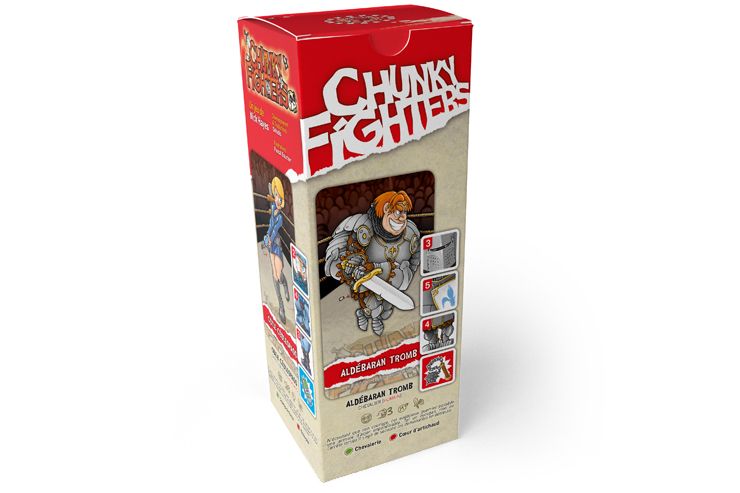 Traumatized by a balance of power in primary school, the young Denis Portion dedicates his existence to the study of conflicts of all kinds. Genius of his state, he launches himself body and soul into the development of a new-generation computer with a power of staggering. After almost a lifetime ... Say, two weeks ... It generates a machine he calls the Megalordinatron. Denis's ambition is to reference all the creatures of the world, and make them fight each other in a merciless fight. Then it will be enough to classify them in order of dangerousness. Thus, no more power struggle will be estimated lightly: we will know, before it takes place, whether a conflict is doomed to failure, or not. However, a small error in the program, makes the creatures invoked are printed, not in 3D, but in 3 dice ... Well, whatever, it's only a detail.

CHUNKY FIGHTERS is a funny and exciting (and super-fun) fighting game by Nick HAYES! With action, adventure, emotion, suspense, thrill and not love at all. 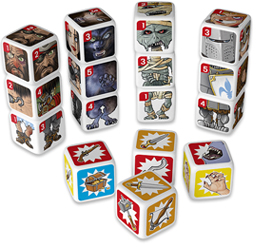 Each player composes his team with the proud fighters put at his disposal. Attention, a wise choice is necessary because the combatants have special abilities that make them unique. It is important to make a combination of warriors suited to your strategy. Then, players must fight each other by fighting their characters against those of their opponents. Each of these fighters is represented by 4 dice: 3 dice which compose the Body (Head, Chest and Legs) and 1 die which determines its Equipment (of variable powers).
From a more technical point of view, the characters will be composed of 4 white dice of 22mm side, with which will be joined 3 boards of 8 stickers each. Then ...: 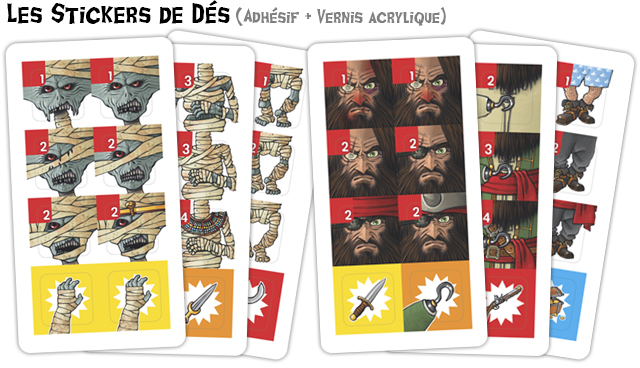 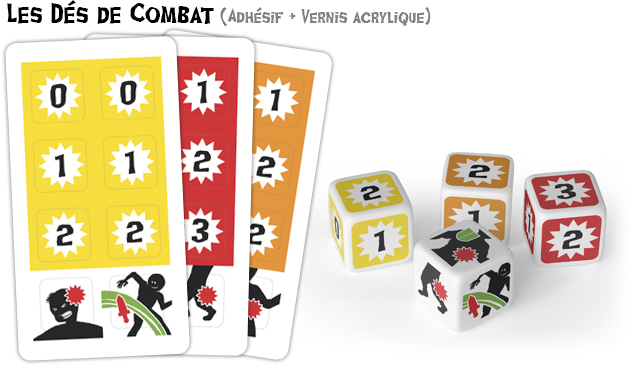 • Each player, in turn, will play a character of his choice.
• He will be able to Attack, Parry, Disarm, Heal, Support, Use a Talent or Change Weapon.
• The aim of the game ? Defeat all the opponents present with the best strategies!
• Fast and nervous parts!
• To play from 2 players to many more, each for himself or in a team. 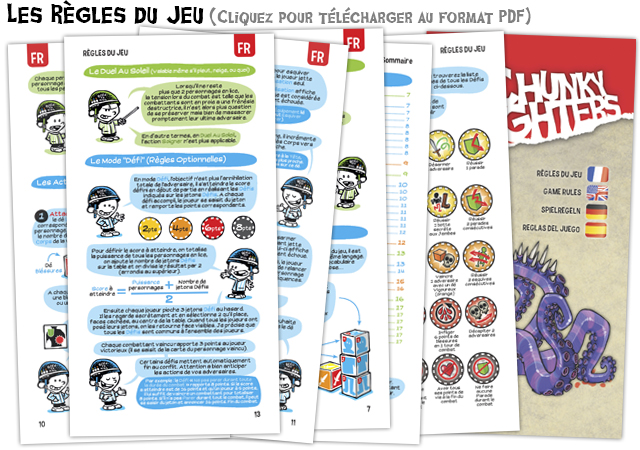 Note that the game has 2 combat modes:
• The "Higlander" mode: there can only be one.
• And the mode "Challenge" or the goal is not to beat his opponents, but to achieve a goal of points in realizing the challenges posted.

This starter pack (Starter #1) includes:
• 5 "Action" tokens that can be used to mark Fighters targeted by special skills,
• 2 identified "Fighters" (Perry Anthrust & Stella Fusion),
• 1 Mystery Fighter (randomly selected from the 10 available Fighters),
• 3 combat cards (FR and EN) which list in detail the abilities of the characters,
• 10 "Challenge" tokens (randomly selected from 25 available challenges),
• 15 "Rage" tokens,
• 12 boards of 8 stickers each,
• 16 dice of 22 mm,
• 1 Booster "Combat Dice",
• 1 rulebook in French, English, German and Spanish.
Downloads
CHUNKY FIGHTERS - Rules of the game
25/09/2019 - 2185 ko
Download
Comments
There is no comment for the moment. Be the first one by clicking here.
Stay connected
Don't miss it !